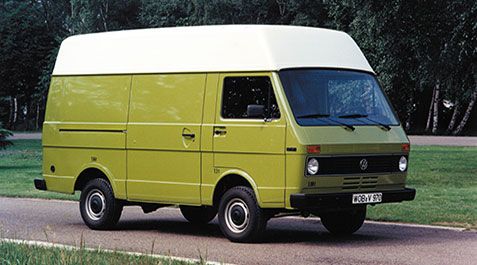 Celebrating 45 years of the Volkswagen Crafter

The Volkswagen Crafter is celebrating its 45th anniversary, having first been revealed to the world in Berlin in April 1975.  Launched as the big brother to the Transporter, the Volkswagen Crafter has gone on to sales success and multiple awards won across four generations.

With a requirement for a van that could carry heavier loads, Volkswagen developed a van to fill the gap between its iconic Transporter model and a heavy truck – a cargo vehicle in the 2.8 to 3.5-tonne segment.

It was called the LT, short for Lasten-Transporter, which loosely translates as heavy load Transporter. It was available in two wheelbases, two roof variants, as a panel van, station wagon, bus, platform, and double cab.

This versatility has stayed with the Crafter over the past 45 years and, since it launched, more than 1.5 million models have been produced and sold across the world.
To celebrate its birthday, we're taking a trip down memory lane, from the model’s beginnings through to the multi-award-winning Crafter on sale today.

With a focus on load space, engineers designed the original with a front engine between the driver and front passenger seat above the front axle, while maintaining rear-wheel drive. This space-saving design meant the LT remained compact – just 33cm long and 20cm wider than the T2 Transporter – but with a 50% increase in cargo volume to 7.85m3. Inside, designers focused on ergonomics with controls placed close to the driver and a better view through a large windscreen.

An independent front suspension system, not standard in the segment until many years later, provided driving comfort for the LT, while power came from a 2.0-liter 75PS four-cylinder petrol engine which featured on the Audi 100, or a four-cylinder 2.7-liter 65PS diesel. In 1979, Volkswagen introduced its first six-cylinder, with the 2.4-liter engine adding 8PS and a much smoother drive.

In 1983, the dashboard was redesigned and new engines were added to make the LT the most powerful van in Europe, while even better space optimisation allowed for a third seat to be added in the cabin. A 4.6m wheelbase was made available for platform conversions, too.

Two years later, a 5.6-tonne variant was added along with a switchable four-wheel drive and a new rectangular headlight design replacing the circular lights. The original LT underwent its final facelift in 1993, with a new radiator grille and rear light design plus a revised turbo diesel engine.

Due to its quality and reliability coupled with the large usable area yet compact dimensions, the LT quickly became a popular base for motorhomes. In 1988, Volkswagen revealed not only the T3-based compact California but also a motorhome based on the LT: the Florida, a fully-fledged motorhome for four people with a wet room.

LT2: 1996-2006
Total worldwide sales: 340,000
The LT2 was the first new vehicle to be launched by the newly-founded Volkswagen Commercial Vehicles brand and took the popular model into the modern age. Developed in partnership with Mercedes-Benz, the LT2 featured diesel engines fitted lengthways under a short bonnet, a lower door for easy entry, and the option of getting into the load bay or passenger compartment between the front seats.

It lost none of its versatility with a panel van, station wagon, bus, platform, double cab, and chassis with three wheelbases, and weight options between 2.6t and 4.6t.

The TDI engines were another advantage providing economical, powerful, and reliable performance. In 2002, the LT2 got the new 2.8-liter four-cylinder diesel, delivering 158PS, a record for the sector, and maximum torque of 331Nm.

Production at the Stöcken plant in Hanover ended in 2006 after almost 340,000 LT2s had been built there.

The Volkswagen Crafter: 2006-2016
Total worldwide sales: 480,000
The Crafter name was first introduced in 2006 and with it came a complete overhaul of the LT model which still maintained the elements that had made the van a best-seller. The name was chosen to stand for “someone who helps” with the Crafter designed to make life easier in everyday work and life.

The most spectacular variant of the third-generation model was the 2012 Crafter 4MOTION with an all-wheel drive. The vehicle was fully equipped with a raised ride height, off-road tyres, and a full underride guard. The Crafter 4MOTION demonstrated its credentials as a support vehicle at the Dakar Rally in 2012.

For 10 years, the Crafter was produced in a wide variety of variants - box, station wagon, bus, platform, double cab, and chassis – with over 480,000 units sold.

The new Crafter: 2016-
Total worldwide sales: 260,000 (end 2019)
The current Crafter was revealed in 2016 and was a completely new model built from the ground up by Volkswagen Commercial Vehicles engineers. It was designed in partnership with customers, with specialists spending time with drivers in their everyday life to find out how they used their vans and what they required from them.

The result is probably the best and most diverse vehicle in the segment. The Crafter was available with front, rear, or all-wheel drive for the first time, class-leading handling, and an unprecedented number of safety and driver assistance systems. It received the title of "Van of the Year 2017" from the international jury of commercial vehicle journalists from 24 European countries, confirming its status as the benchmark of the sector.

Volkswagen Commercial Vehicles continued the model’s heritage in the motorhome market with the reveal of the Grand California in 2018 while an all-electric eCrafter was also developed.
By the end of 2019, almost 260,000 had been produced at the Crafter plant in Wrzesnia, Poland.

For more details on Volkswagen Commercial Vehicles’ award-winning range of products and services, all your nearest Breeze Van Centre in Poole, Southampton, or Portsmouth.

16-12-2021 Pricing for the Volkswagen Multivan has been announced, with the all-new model…
Read more >